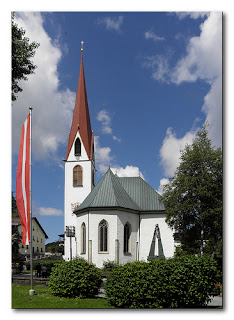 Seefeld is located in the Austrian state of Tyrol, 11 miles northwest of Innsbruck. The area was first mentioned in the year 1022, it has been a popular vacation resort area since the 1900's and was the site of the winter Olympics in 1964 and 1976.

But Seefeld is known for much more than winter sports.  In 1384 our Lord chose this area, at the time a small farming village, to manifest Himself in visible form during Holy Eucharist as living Blood.

According to the Saint Oswald Church website, in 1286, Rupert Milser, the grandfather of Oswald had a chapel built for the monastery at Stams.  It was inaugurated in 1306.

On Holy Thursday 1384, Oswald Milser, Lord of Schlossberg approached the altar during Mass to receive Eucharist.  Instead of taking the small Host reserved for the communicant, he requested to receive the large Host as does the celebrating priest. Obliging, the priest gave Oswald the large Host.

As soon as the Host was placed on his tongue the stone floor beneath Oswald broke away and Oswald, still kneeling, sunk into the floor. At the same time Blood began to flow from the Host in Oswald's mouth. Oswald could not consume the Host, and It was retrieved by the priest. 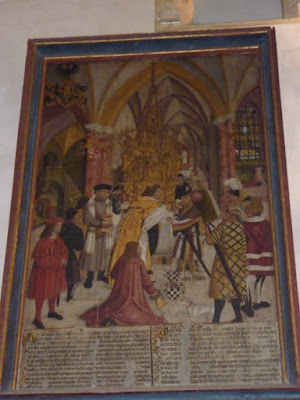 After the miracle, the Host was reserved for veneration.  So many pilgrims came to see the Host, that between 1423 - 31, Duke Friedrich IV ordered that additions be made to the church to accommodate the large number of visitors. 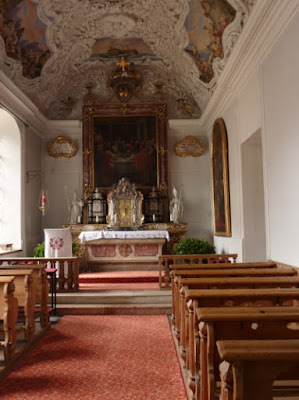 The Blood Chapel (shown above) was built and dedicated in 1574 with the solemn transfer of the miraculous Host. 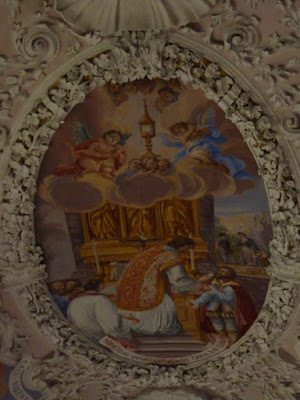 The fresco (shown above) is on the ceiling of the Blood Chapel and is attributed to the court painter Michael Huber. 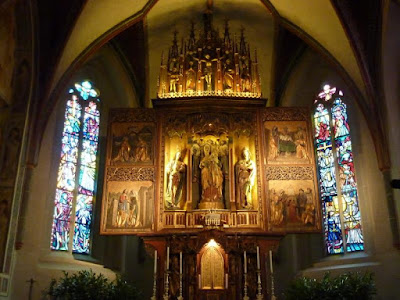 The Church of St. Oswald is located at Maximilianweg 29, 6100, Seefeld, Austria.  It has been over 630 years since the Eucharistic Miracle, still the hollow that was made when Oswald Milser sunk into the floor can still be viewed.  It is covered with a grate (for safety reasons) on the south side near the High Altar. 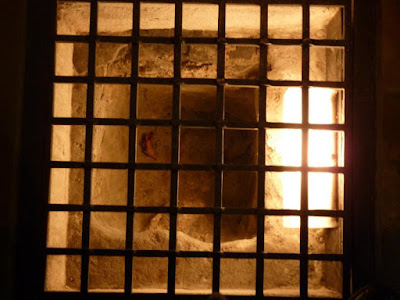 Over 600 years later Our Lords Precious Blood is still visible on the Miraculous Host in the monstrance kept in the tabernacle in the south wall near the High Altar. 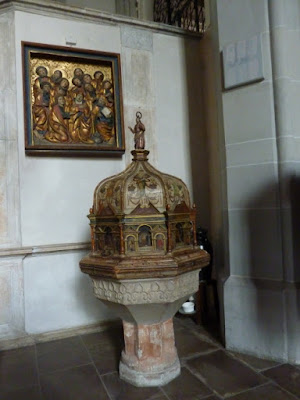 2000 years ago Jesus paid the ultimate price for our salvation. In his mercy he continues to show us the miracle in Seefeld 600 years later, when under normal circumstances the Host and Blood would have decomposed years ago. He shows us this so that we too may believe that Jesus is the Lamb of God who takes away the sins of the world.

But we do not have to go all the way to Seefeld, Austria to experience this miracle.  Jesus comes to us, Body, Blood, Soul and Divinity every time we take the Eucharist.  Happy are those who are called to the Supper of the Lamb.

___
All but the last picture are from Parish Web Site.
Posted by Adventures of A Home Town Tourist at 1:30 PM